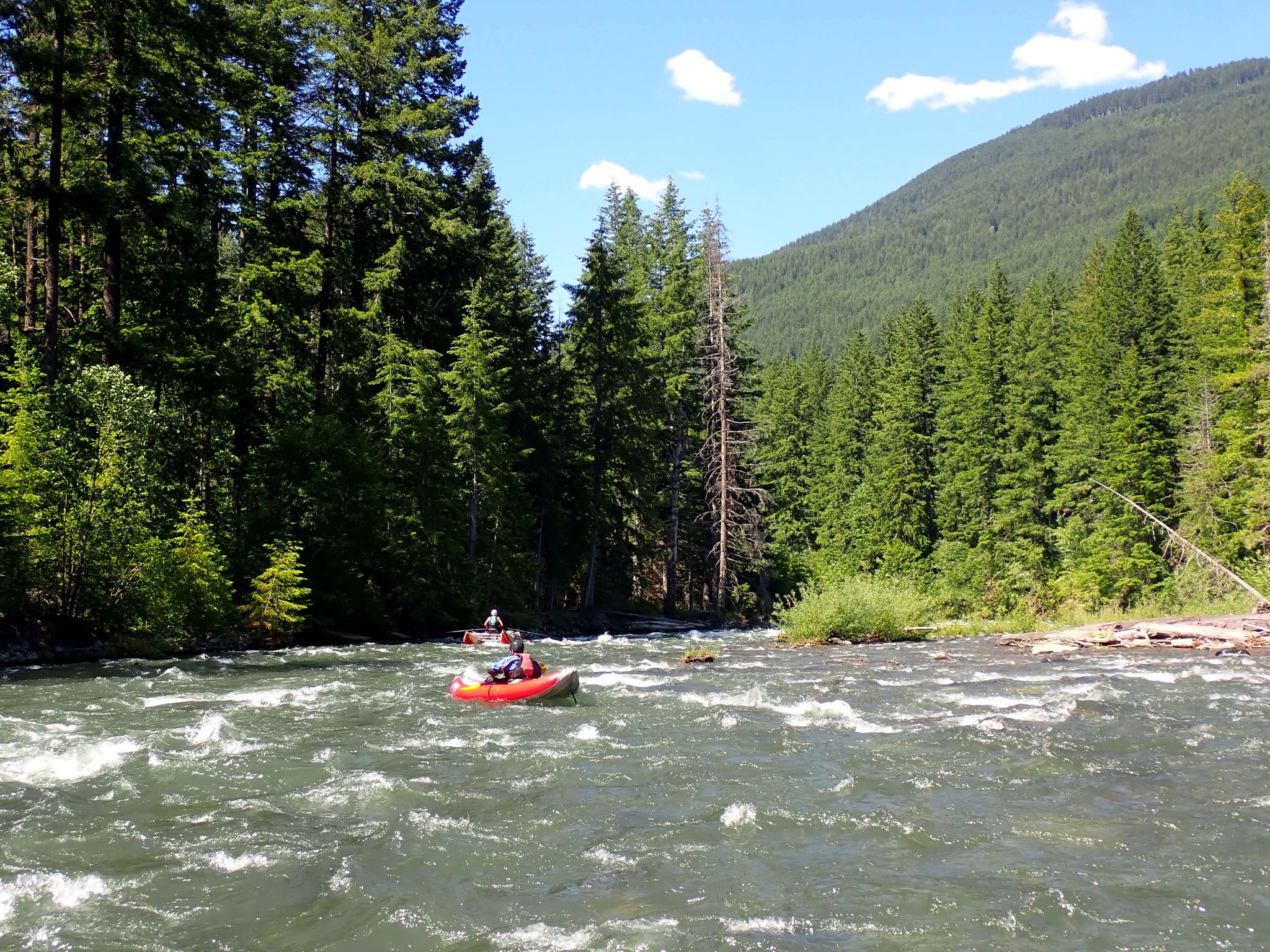 Here in the Northwest, there are a handful of river’s that both rafters and cat-boater’s overlook in the Cascade mountain drainages and one of them that comes to mind is the Upper Cispus River. It’s located roughly 20 miles southeast of the community of Randle Washington and its main drainage is from the southwestern flanks of the Goat Rocks and the northern terrain of Mt. Adams. It’s basically a mid to late springtime, snow melt fed river. 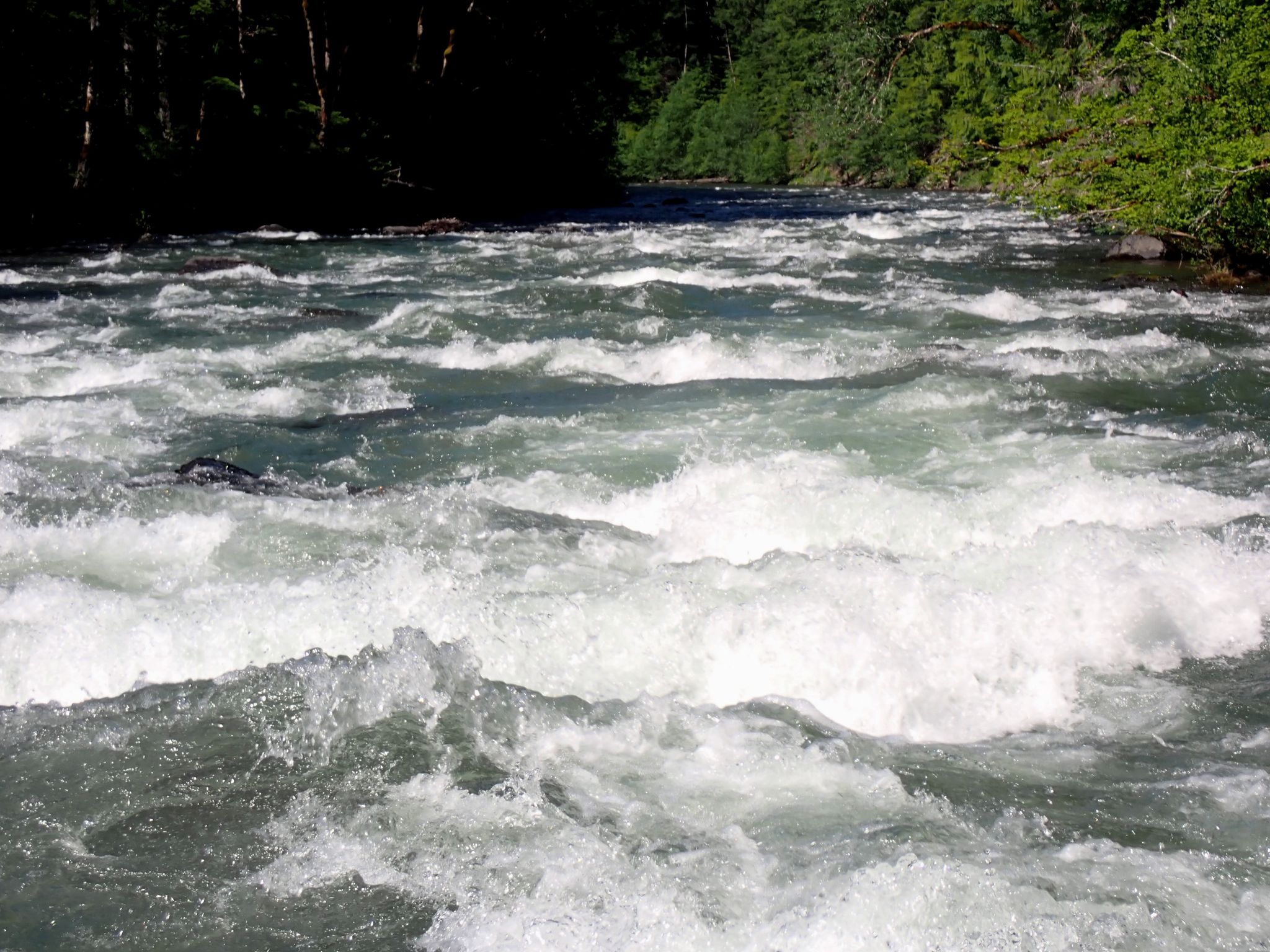 It had been many years since I last boated this gem of a river. I was able to talk both Steve Herring and Doug Smith into joining me on this river after running the Klickitat River just a couple days earlier. During this year’s unusually high flows of June, I was able to meet up with both Steve and Doug in the vicinity of the North Fork Campground and Forest Service road #28. After spending a good hour looking for the old original takeout that I used roughly 20 years ago, we came to the conclusion that the river system had changed and the once open gravel bar that was located just downstream from the North Fork Campground is now over grown with Alders and thick underbrush. So we decided to use a steep road side takeout off FS-28 that required carrying our cat-boats up a steep rip-rock embankment.

The launch site for this run is very obvious where the Forest Service road #23 crosses the Cispus and there’s a remote campsite along the left bank where the bridge crosses. This is a high elevation run that starts near the 1,900’ elevation. Most of this 8-1/2 mile run is concentrated in a deep forested canyon and the river’s main rapids are not scout-able from the road, as the road is located high up above the river.

Once on the water, this run starts out with class 2 to 2+ rapids but soon you’ll encounter continuous class 3 and 3+ rapids as you enter the gorge section. Which is roughly 1-1/2 miles into the run. The rapids in the gorge are continues with very limited eddy’s to grab for scouting. Big Bend Rapids is the first class 4 rapid that you’ll encounter. Basically, read and run. Thread through boulders at the top of the rapid and work your way right and then back to center. Not too far below this rapid is White Lightning! A sharp left cut around a bend lands you up onto this fast approaching, steep, horizon line class 4 rapid. It’s not easy to recognize the route due to its steepness and exploding water hidden behind the drop. There is a micro eddy on the far right bank. But if you miss it, go either center over a stair-like series of boulders and cut towards the right or go far right. Below this rapid the river peacefully drains through a beautiful gorge before it then turns into class 2 and 2+ rapids. 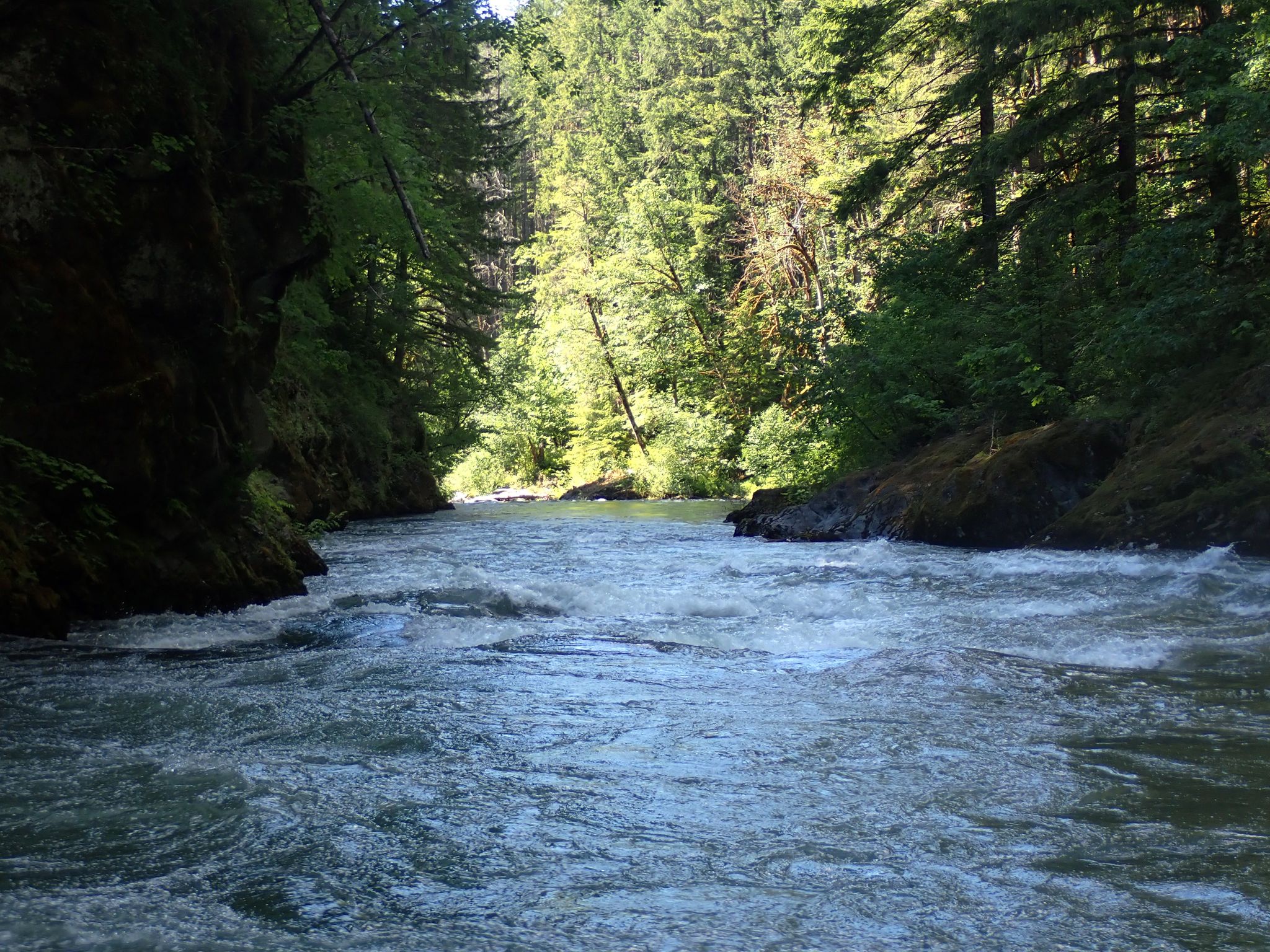 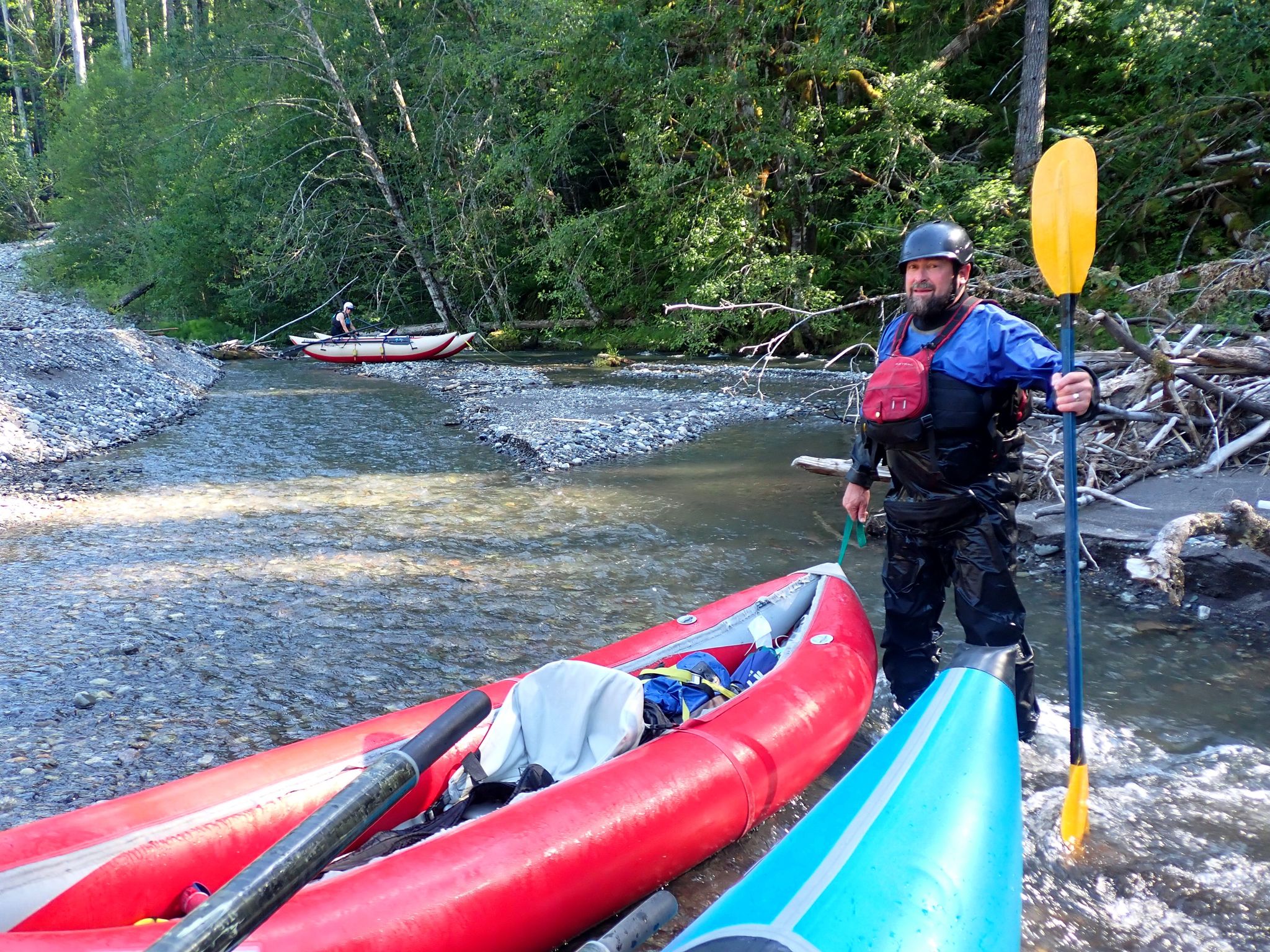 The lower mile or two of this river section will cut around some braided channels. So watch for wood blocking some routes. There used to be another class 4 rapid about three quarters of the way into the run call Smooth Rock Falls. This rapid completely changed after the historical floods of February of 1996. It’s now a straight forward class 3 rapid. In some of the older guide books that were published before 1996, Smooth Rock Falls is identified as a class 4 rapid. 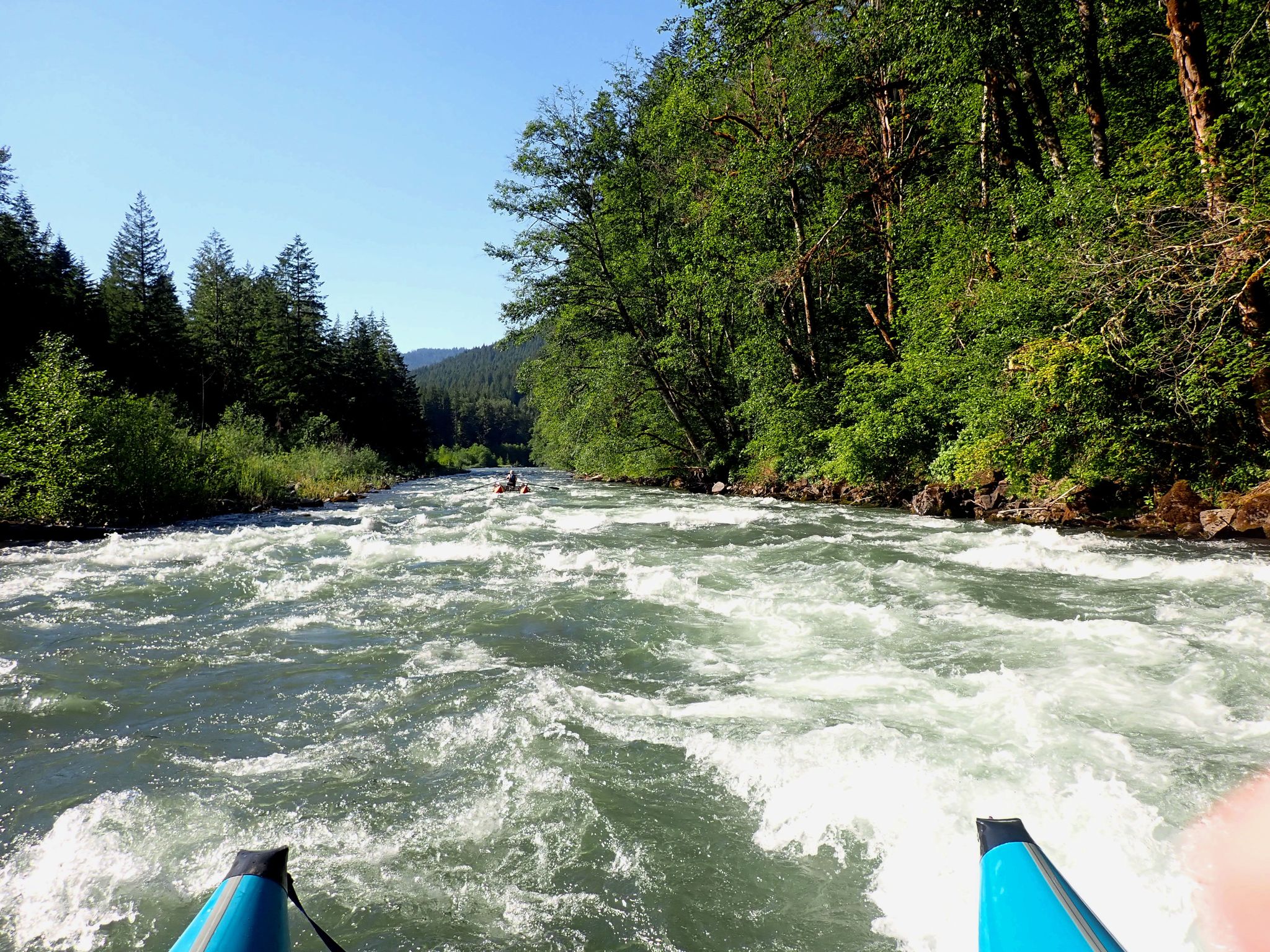 The river levels we had for this run on the Upper Cispus River was an ideal level of 2,100 cfs on the Cispus gauge located above Yellowjacket Creek. I would not raft or cat-boat this section of river at a flow any lower than 1,500 cfs. The top end would be no more than 2,800 cfs for a first decent on this section. There’s a great class 5 section of river on the Upper Upper Cispus that is located just above this run and it drops an average of 130 feet per mile. It’s very demanding and is only boated by experienced kayakers and R-2 paddlers. It has several steep class 5 and 5+ rated waterfalls such as the 30 footer called Big Falls! And occasionally some of the more demanding boulder drops and ledge drops can have wood blocking some of the rapids. The lower section of this river below the takeout is class 2 and 3. But the takeout is not accessible because the timber company and Cowlitz Falls Reservoir (Cowlitz County PUD) has the lower gates locked and secured. Both Jeff Bennett’s Guide to the Whitewater Rivers of Washington and Doug North’s Washington Whitewater guide books have write-ups and descriptions that describe this river section in detail with maps.